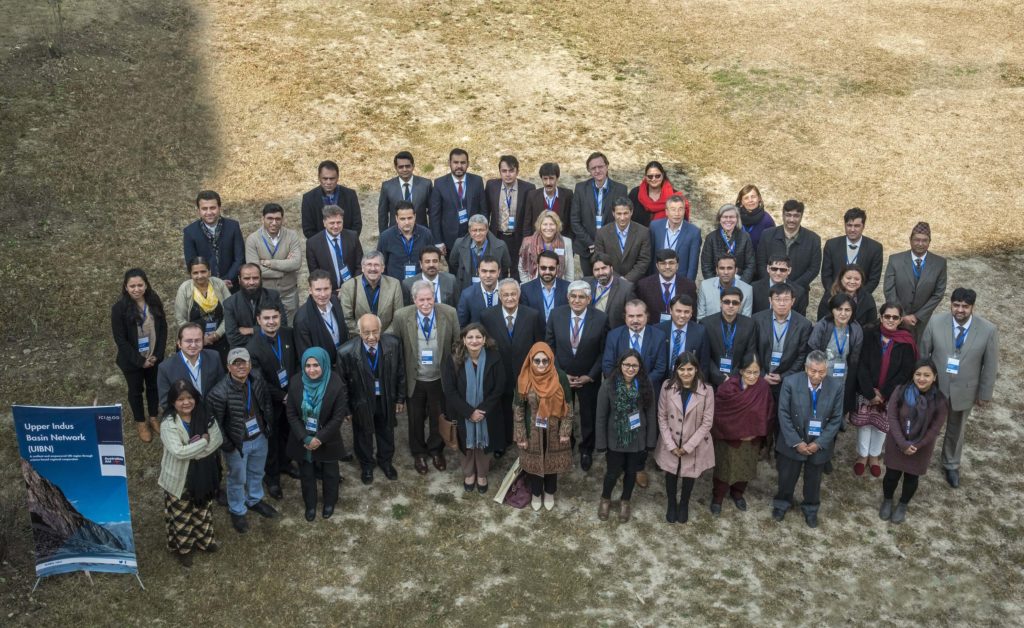 Glaciers in the upper reaches of the Indus River basin are an important source of freshwater. However, as climate change in the region affects water flows, sectoral development will also be influenced. For example, downstream water availability will influence Pakistan’s wheat production. Efforts such as the Upper Indus Basin Network (UIBN) serve as a platform to discuss these developmental challenges while also engaging with governmental and non-governmental entities in the basin.

The UIBN aims to bring concerned institutions in the region together, allowing experts to collaboratively address the common transboundary issues across four riparian countries sharing the Upper Indus basin (UIB) waters – Afghanistan, China, India, and Pakistan. The network facilitates information and knowledge exchange and contributes to informed decision making, particularly in the governance in the four countries, to reduce vulnerabilities and build resilient and adaptive capacities. The network is guided by a strategic committee, a group of advisors, and technical working groups in thematic areas.

The 2nd Regional UIB-N Workshop was held from 17 to 18 January 2019 at the International Centre for Integrated Mountain Development (ICIMOD) in Kathmandu to strengthen research and knowledge generation through the UIBN. The workshop – organized by the Indus Basin Initiative under ICIMOD’s River Basins and Cryosphere Regional Programme – revisited the objectives, vision, mission, and governance structure of the UIBN’s technical working groups, which had been formalized in prior meetings.

Speaking at the workshop, David Molden, Director General of ICIMOD, highlighted the importance of the UIBN as a platform bringing different groups together to address the common issues and challenges faced by people living in the UIB region. Peter Budd, Australian Ambassador to Nepal, stressed on climate change and its global implications for water resource management, food security, energy, and disaster risk reduction. Knowledge sharing through a platform such as the UIBN can initiate regional cooperation to jointly address these complex upstream and downstream issues in the UIB.

Khalid Mohtadullah, UIBN Chair, described the UIBN’s growth from a country-focused platform to a more comprehensive regional initiative. Given the limited research on climate, cryosphere, water, hazards, and adaptation in the UIB, the UIBN’s focus on promoting collaboration among organizations working in the region has led to significant progress on understanding of present and future water availability, demand, and hazards in the basin. This allows for the formulation of evidence-based local- and national-level solutions.

During the workshop, the technical working groups presented their progress and discussed knowledge generated and gaps identified through research in the region. The workshop revisited the UIBN governance structure and approved the framework with some changes. In previous meetings, UIBN members had expressed interest in evaluating the network’s activities; a performance evaluation matrix was therefore suggested during the workshop, which will further contribute to effecting desired change. An adhoc strategic committee role was proposed by members for shaping the UIBN’s strategic direction.

The Afghanistan and Pakistan country chapters also shared their progress. The formation of India and China country chapters, which will be prioritized moving forward, was discussed, with participants from China and India proposing the structure of their respective country chapters. The regional strategic members proposed that SDG-oriented activities may be included into country chapter objectives – these could serve as success indicators contributing to the UIBN theory of change. UIBN members will be convening for the UIBN strategic committee’ biannual meeting in July 2019 and the annual regional UIBN meeting in January 2020. Country chapters will have regular meetings within this time period.