Population management – need of the hour

Pakistan entered decade of 2020 with a population of 207 million putting a huge demand on already scarce resources. While the new regime was struggling to find its feet on the ground comes the pandemic COVID-19 bringing death, disaster and economic hardships.

Governance came to be tested and challenged, specially in the weak public health system which had received scant attention in all these years. Country faced a double jeopardy of huge population and lockdown impact on economy and citizens leading to increased corruption, street crime and vulnerability to hitherto controlled terrorism.

We have no option but to join the ranks of other Muslim countries like Bangladesh to control the population for progress and development. The continued status quo following the old beaten path of lack of population control has driven us to reliance on international support with aid and loan. Time has come to stand up as a sovereign nation mobilizing internal resources of human power and build on its own natural wealth by human resource development and allocation of budgets to education, skill building and social services.

COVID-19 has given us the opportunity to catch up with other nations by building a knowledge-based society enhancing existing telecommunication and information technology infrastructure to leapfrog in science, research, technology and education.

Today we join the world observing 11th July as ‘Population Day’. Our Constitution guarantees fundamental rights to all citizens. As such, it is appropriate we take stock of our compliance on the rule of law.

A cursory look at some socio-economic indicators reminds us of where we stand in fulfillment of the Constitutional obligation. The right to education Article 25A states, “The State shall provide free and compulsory education to all children of the age of five to sixteen years..” This remains to be implemented and shall unfortunately remain a challenge if population growth continues at current rate.

Our gender record is tribal and suppressive. Honor killing is part of laws and exploitation of our daughters, sisters and mothers continues unabated. Extreme inequalities based on regions and religions dangerously turning into acceptable norms. All these can be contained if population is managed effectively.

The citizens suffer the agony of heat waves all over the country due to nonavailability of electricity. The rural situation was already pathetic but now the large cities like Karachi, Lahore, Quetta, Peshawar have joined the rank. Even Islamabad is no exception. Is this not enough to remind us of the burden population puts on all our resources necessitating urgent focus.

In an otherwise self sufficient agro-based economy where we are exporters of wheat, rice, cotton, meat, and 4th largest milk producer worldwide; we import food. It is time to remind ourselves of the Malthusian Theory of Population which states that population grows exponentially, thus out-growing a society’s resources which grow arithmetically. This is an appropriate theory for preventive and positive checks on population.

In education, science and research we allocate a dismally low percentage of budget. In tele-communication, we need to connect distant areas like Ketibander, Kohlo, Khanpur, Khyber, Kotli and Karakoram to bring all rural and remote areas in main stream of communication network. Of course we should keep increasing resources but coupled with it should be population control.

The recent United Nations Sustainable Development Report (SDR2020) places us at 134th amongst 166 countries. The government will be examining the report for improvement in various indexes but in doing so must remember that the security of the country is the sum total of conventional and nonconventional security of all citizens where ‘no person shall be deprived of life or liberty save in accordance with law.’

Like the world, we are addressing COVID-19 due to its fast spread. Now it is the leadership’s responsibility to take charge by adding the focus on population growth for the well being of country. Jinnah’s Pakistan must take care of each of its current 221 million citizens.

—The writer is former, federal minister and senator 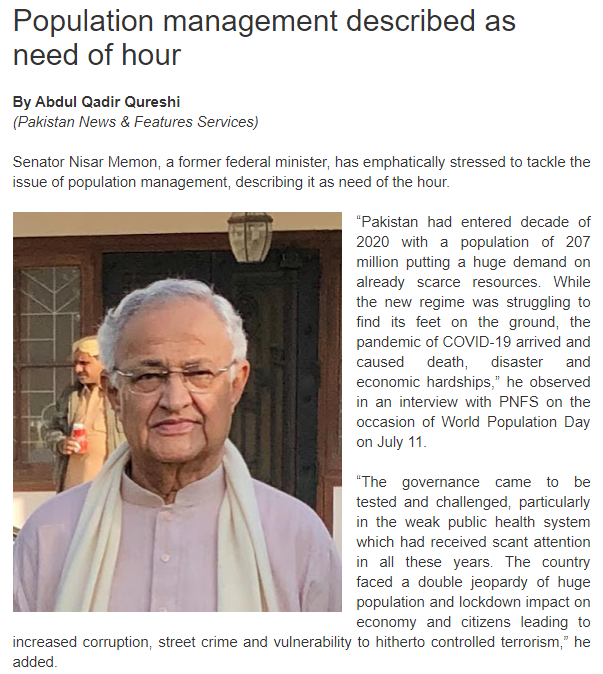